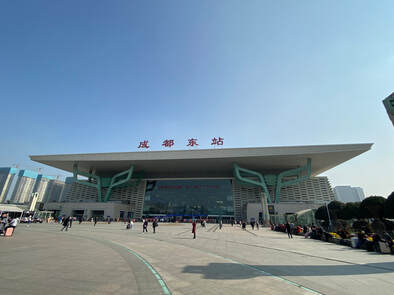 It was off to Chongqing to meet up with a friend who was going to be there overnight. I jumped on the CHR train… and whoops… 198KPH?? What?? Then I realised in my haste I had saved money by booking a G train and not the faster D train. The upside was that the carriage was half empty -and this never happens in China in my experience. After such a packed subway trip to the CHR station it was most welcome! Chongqing was only one hour fifty-five minutes south east of Chengdu and hour and twenty five on a D train! I enjoyed the slower ride anyhow.

​All CHR train stations are grand - see Chengdu pics left - some are newer than other but I find they are mostly all very large to huge and busy and Chongqing Bei did not disappoint! I should actually do a post on them one day as they are quite amazing places to transit through. I negotiated my way off the Chongqing Bei CHR platform, and the down into the subway station to buy a ticket and off I went to explore a new city, but find my hotel first, on the subway. I had been told to try the monorail that runs around the city but that will have to wait till I return and find a couple of hours to complete the  scenic journey. 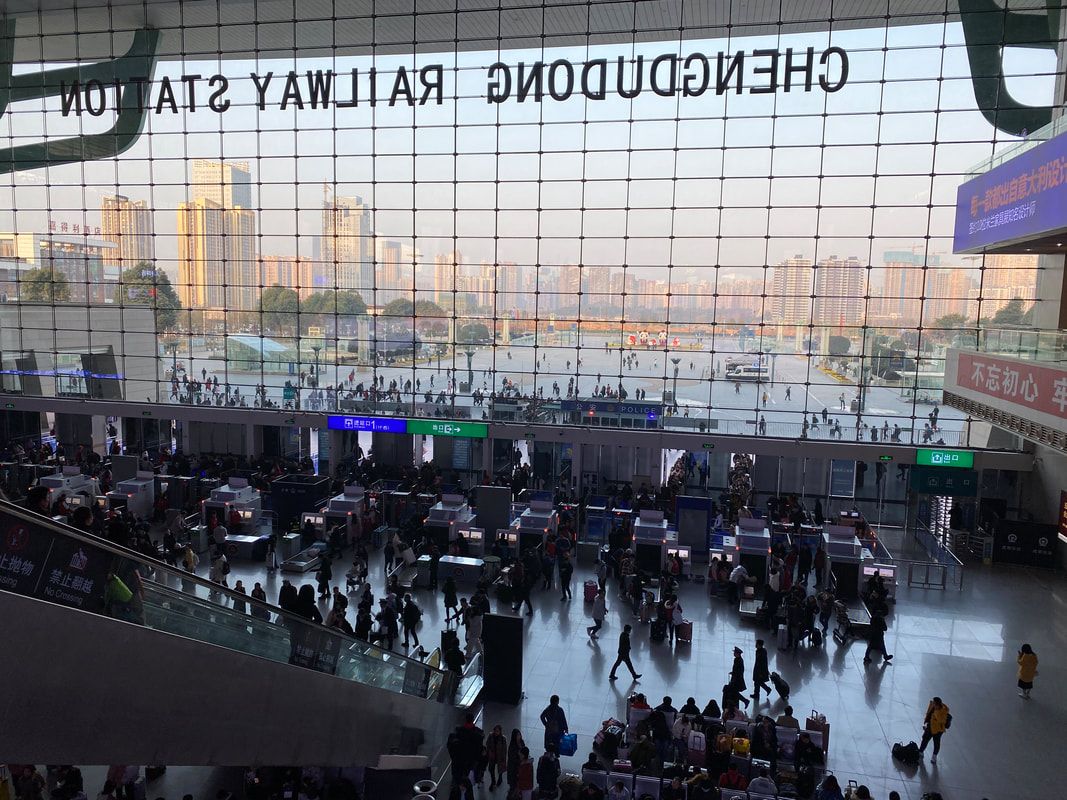 A great photo of one of two  entrances of the Chengdu East CHR Station. A second entrance exactly the same is at the opposite side of the huge concourse not shown here. These stations handle many thousands of travellers an hour with ease - around  100,000 ppl per hour at peak.
After checking in to the  Crowne Plaza Hotel with it's prominent position at the start of the central pedestrian mall,  it was off on foot to get a coffee at the new Starbucks Reserve. The Crowne Plaza was not so long ago called the InterContinental Hotel and the name change is because there is a copy of the huge Singapore Marina Bay Sands Hotel being built in Chongqing, and the InterContinental will be part of the branding of that new complex. No, I did not see it this trip, but it is on my list. I am lucky to have such an interesting neighbouring city so close to Chengdu so it will become an easy getaway too.

The centre of the city here is positioned on a not so large peninsula referred to locally as 'the island'. It is the meeting of two rivers - the famous Yangtze and Jialing. To think that Yangstze runs all the way from here to Shanghai in the east - I suppose about 2000km as the crow flies was amazing.  The many Yangtze Three Gorges river cruise boats are based here too - although it is off season for a few more weeks. Something else I must consider while I am Sichuan based.

Sharon, the Kiwi hotel GM came and found me and introduced herself and, as she was having a some time to herself, invited me to join her on a walk through the lovely city centre. It was very 'local' area with lots of enterprising people going about their day. We wandered past flower, fruit shops and  many vegetable places and poultry shops as the photos below show. I learnt that the Korean Government were here in exile during the Japanese occupation of Korea in WWII and the grey building bottom right below is where the govt was established. It would be interesting to know exactly why Chongqing was chosen. Every year, this special connection is celebrated with a visit from the President or ministers from the Korean Government. 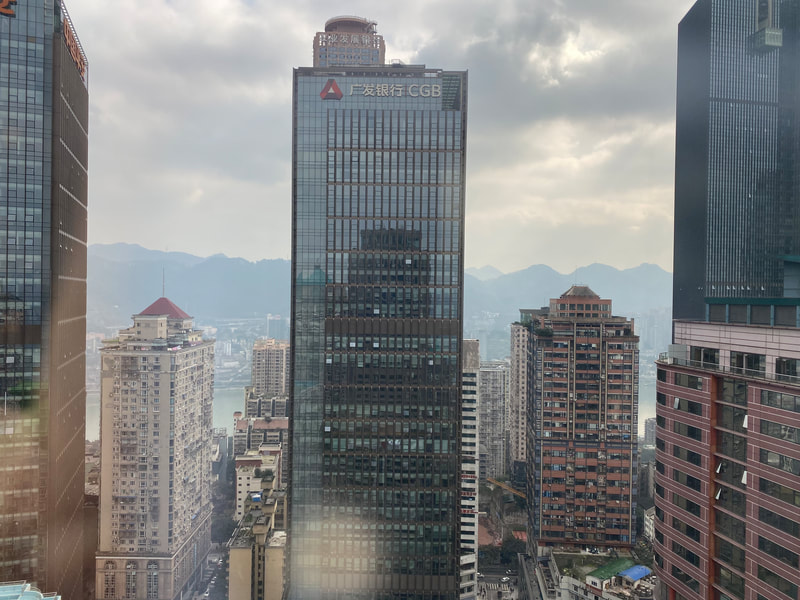 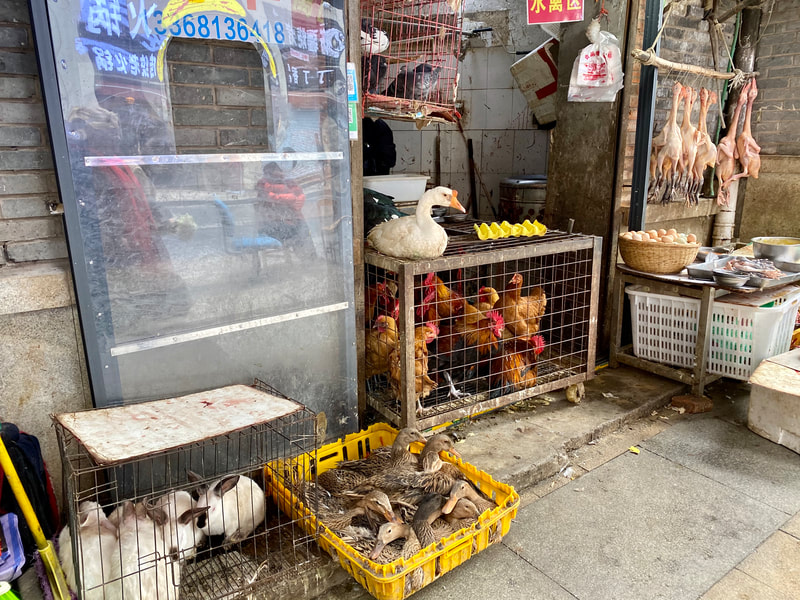 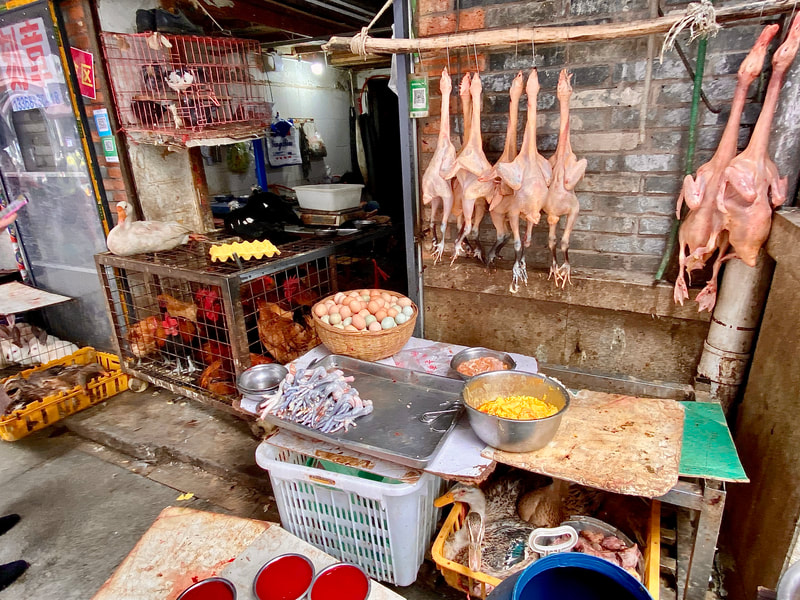 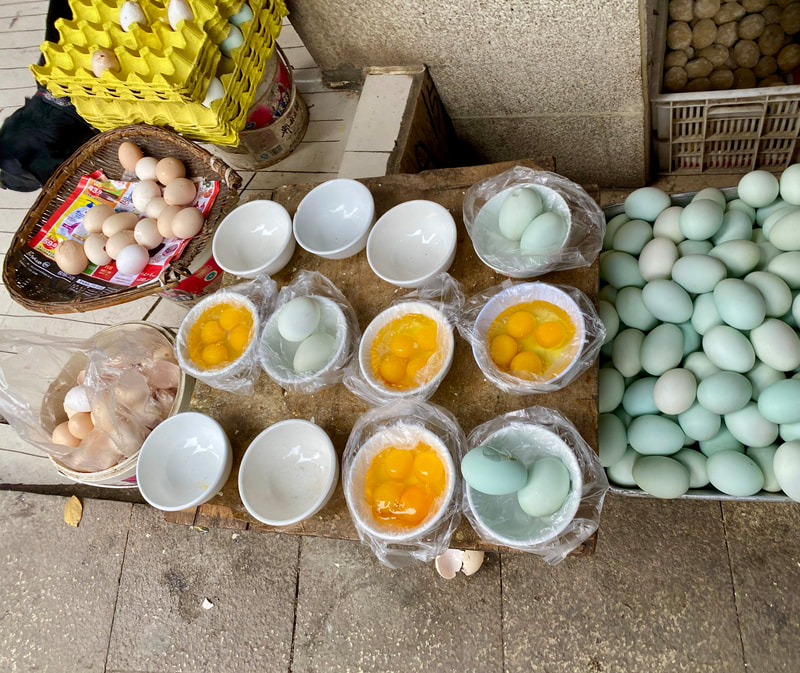 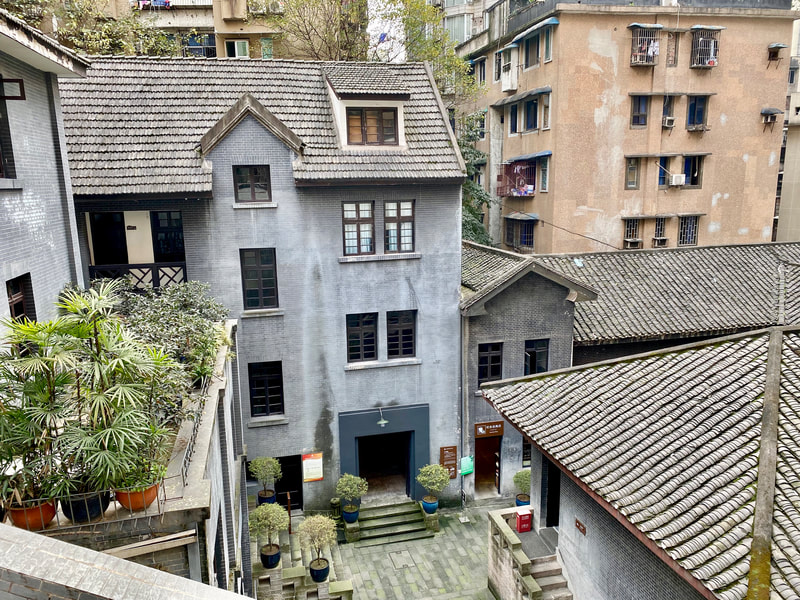 Chongqing city centre is not an overly hilly place but has enough ups and down to make it interesting as we wandered between low and medium rise apartment buildings to the top where a grand teahouse is situated and then started downwards again. 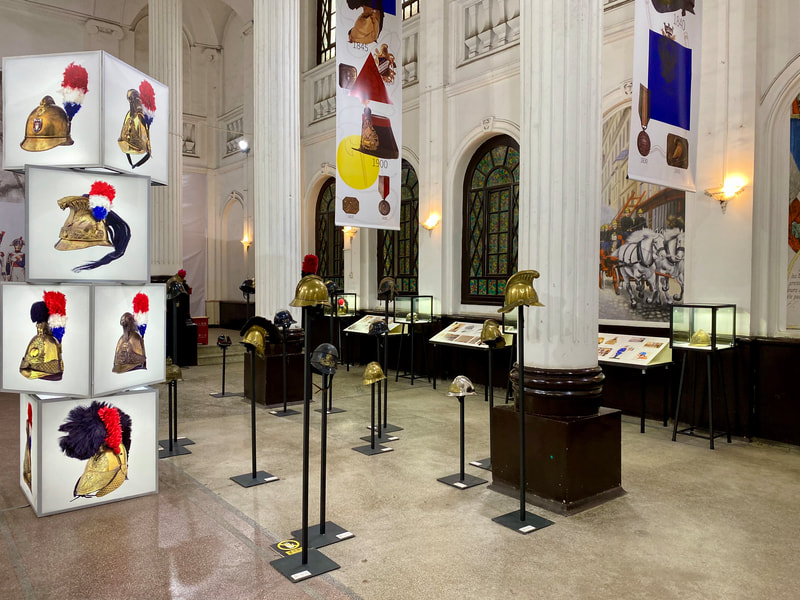 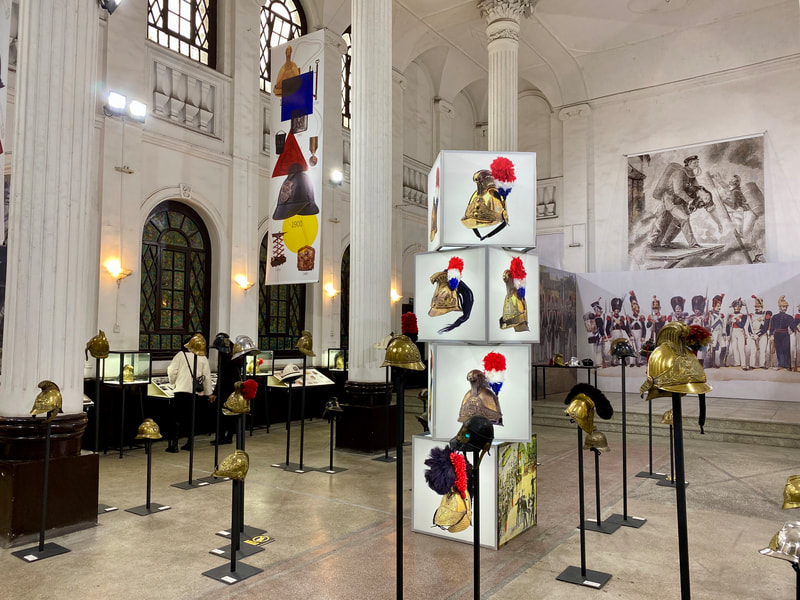 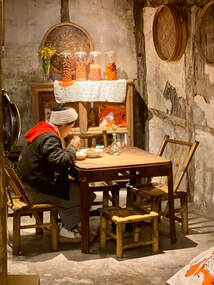 Going down the other side brings you down a pathway where we visited a now vacant site that used to be a French church, and found another church that has been renovated and has of all things... a collection of period brass French fireman helmets. I was slightly taken aback with such an unexpected find. ​By this stage we were on the Mountain City Alley​ walk which is slowly becoming an interesting mix of small arty businesses on the side of the hill looking out over the river. It is an easy walk up or down the pathway and I found it to be nice and low key and certainly not over run by too many visitors the day we were there. I took a lovely photo in a simple food place of the young 'laoban' having her late afternoon meal which ended up being my 'Rembrandt' photo of the day. There was a hostel for young people towards the bottom where we climbed up 3 flights of stairs and I thought I was going nowhere but the lovely surprise at the top to find a communal space with a really nice space with a shop selling handmade things and a coffee shop and bar selling hand crafted beer. So we just had to stop to enjoy a lovely lager beer with the enthusiastic hostel manager and staff and a bit of a chat. 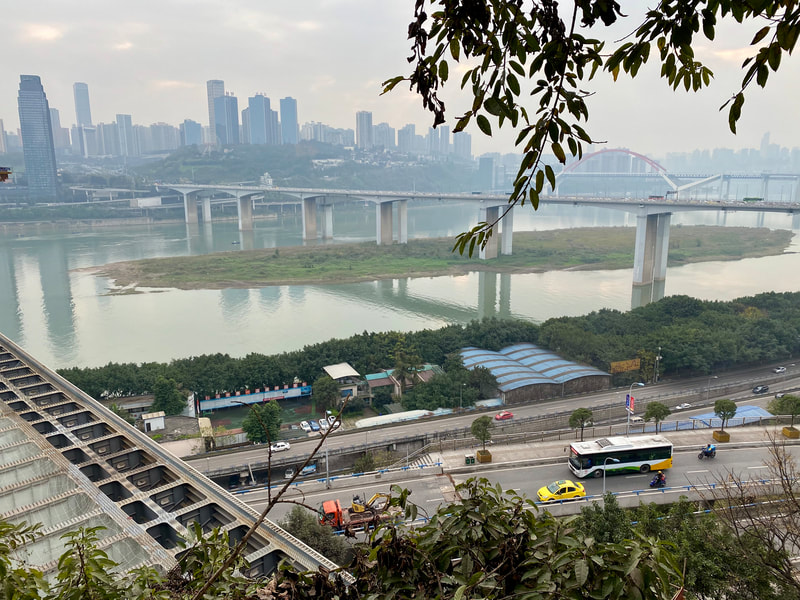 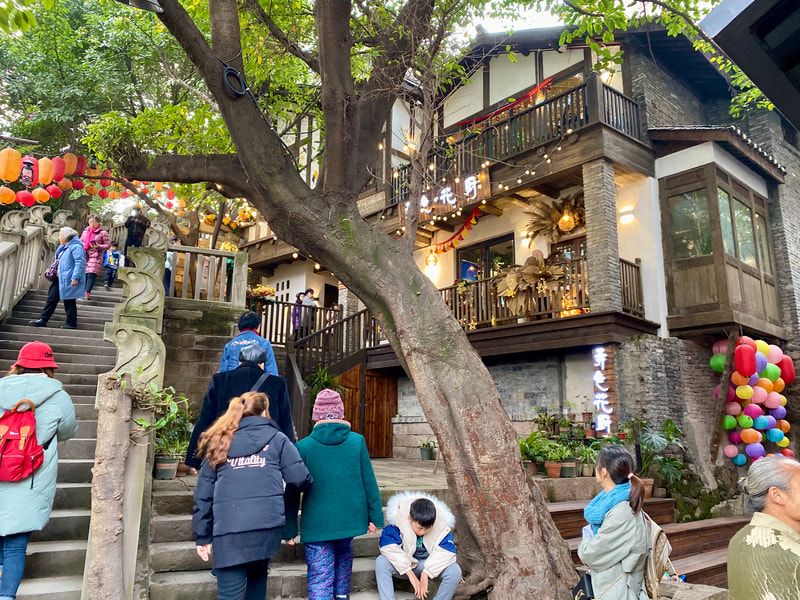 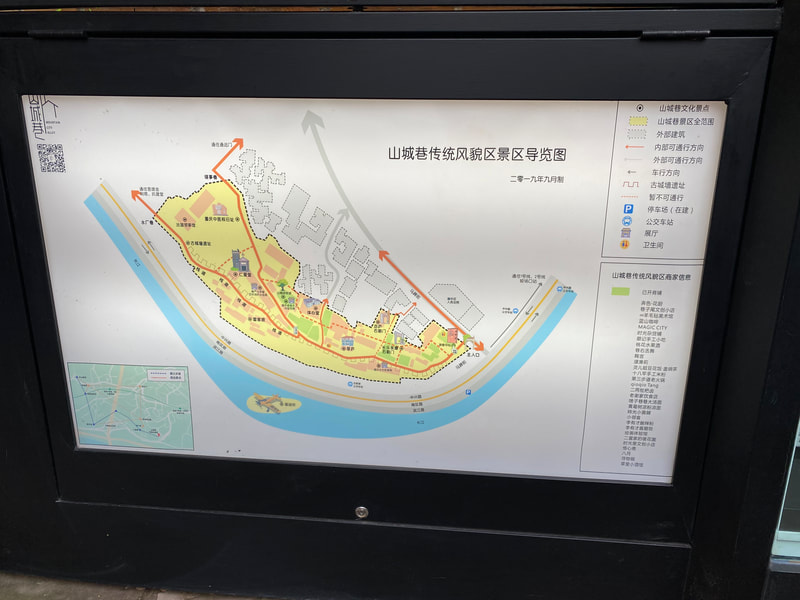 The following day it was a trip by car up the high hill at the beginning of the peninsula about 15 min drive or so from the hotel. There used to be a bank note printing mint/factory (?) there a long time ago. The area is slowly re-emerging as another quite arty/fun/funky place to go called Testbed2/International Contemporary Art Centre. As luck would have it, and as Sharon likes a beer as well, we popped into 'Ben's' I think it was called. Ben is an Aussie who has lived in Chongqing for some years now and started brewing beer. Seems he is going well. I had a lovely Sichuan pepper lager. Just loved it. Those coming to visit Chengdu this year will be coming here most likely for a 2 day stopover as part of the 'tour' as well as a trip on the monorail. By then I will have all my history notes updated and fact checking complete as I am missing some background sorry! Looking forward to my return here in early March already. Thanks to my tour guide Sharon from Chongqing Crowne Plaza hotel. A fantastic couple of days with that Kiwi hospitality thrown in! 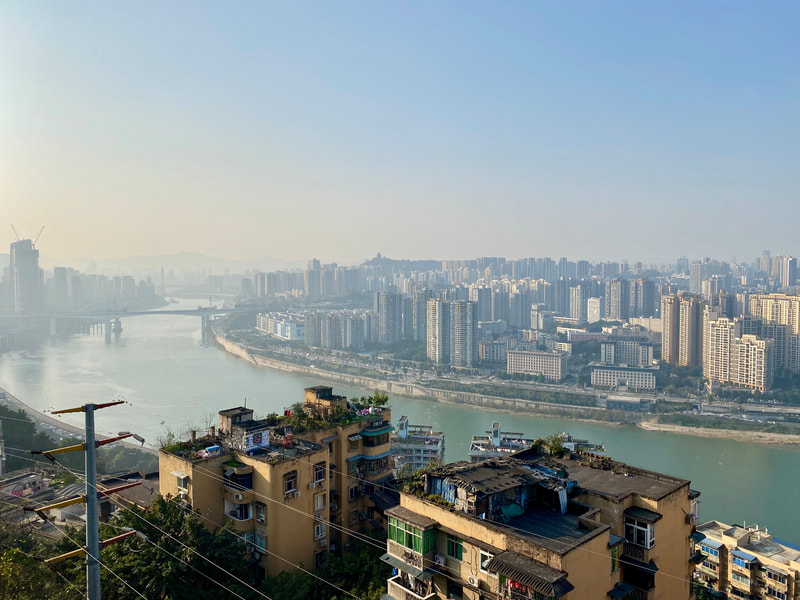 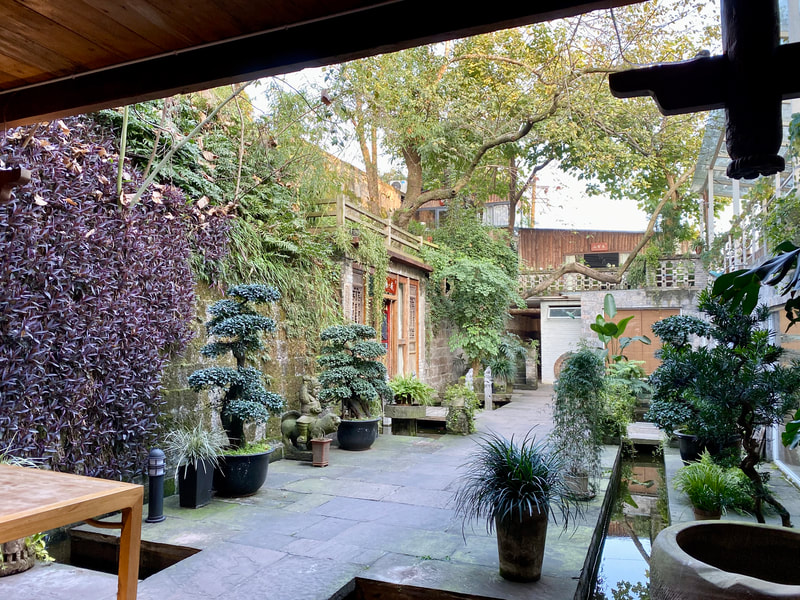 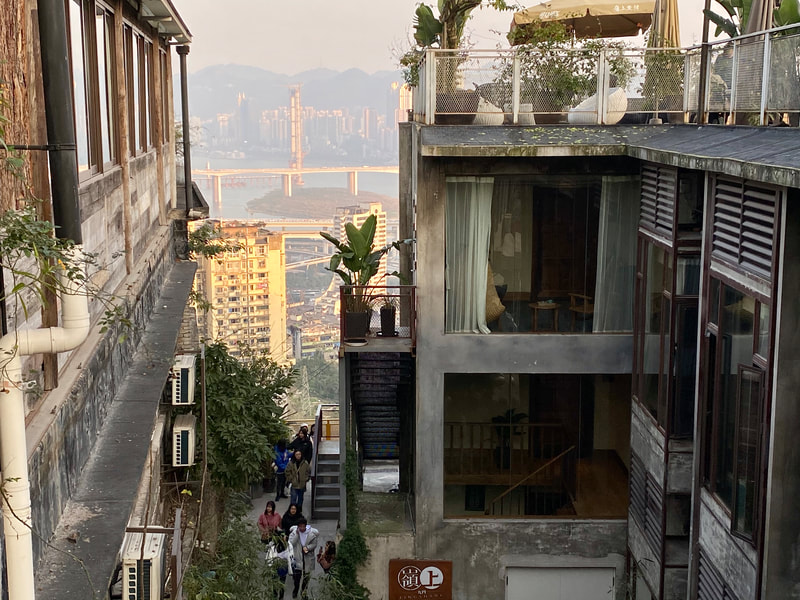 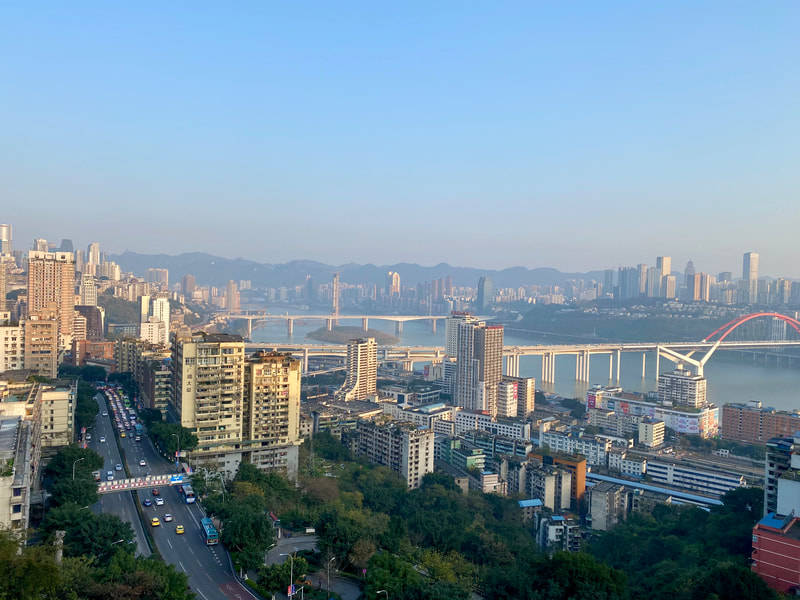 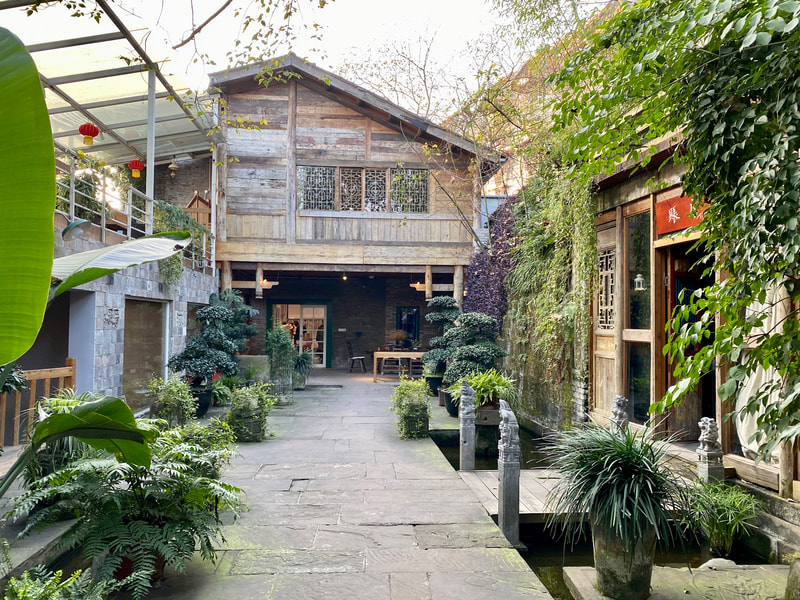 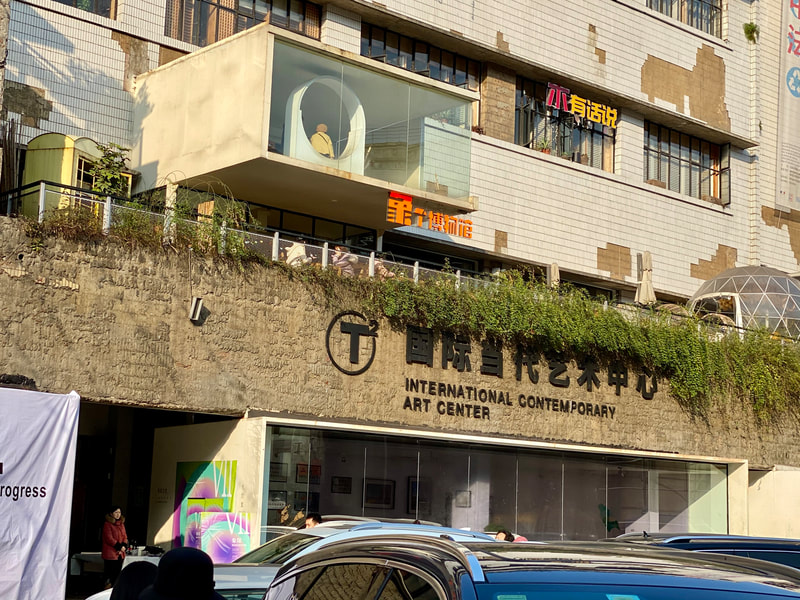