Actually Manaus is situated on the Rio Negro which meets the Rio Solimões about 5 kms east and becomes the mighty Amazon at that point. Manaus may not be the most spoken about travel destination, but it was much better than I had expected.  As a city of 1.8 mill or thereabouts, Manaus covers quite an area with only low rise buildings in the city. Like the other Brazilian cities we have visited, Manaus suffers from economic uncertainty maybe but substantial investment in industry and a huge container port has at least put put Manaus on the map and in a better position than the smaller ports we have seen.  But it has some lovely places like the Opera House which we visited on Day 1 and when we arrived there was an orchestra practising an opera. How fantastic to sit in that wonderful historical building from the past and hear an orchestra live. We actually went back that night for a show with a tour from our ship that was a fantastic jazz orchestra who played a very well executed jazz programme for about 70 minutes. Great sound and a good experience again. ​

As part of the tour to the Opera House during the day, we visited the fruit and veg market and tried and saw things unique to the area. They eat a huge amount of bananas and plantains here it seems, lots of casava, tapioca and grow the biggest watermelons I have ever seen. And then there is fish and there are some huge varieties in this river that I have never seen before. Just enormous - and dangerous too as well those pesky Piranha with their sharp teeth. You can buy a mounted dried varnished Piranha at most riverside tourist stalls - not sure how many they sell though!  The town is not as well maintained as some of us may be used to and I certainly would not walk the streets at night but that could be said for lots of places too. We wandered the streets near the port after our tour as Saturday had brought everyone out and it was quite busy with street markets selling lots of 'stuff'. I discovered you can buy a fridge and an outboard motor in the same department store. Like anywhere you travel mostly these days, you need to be a smart traveller and be always be aware. 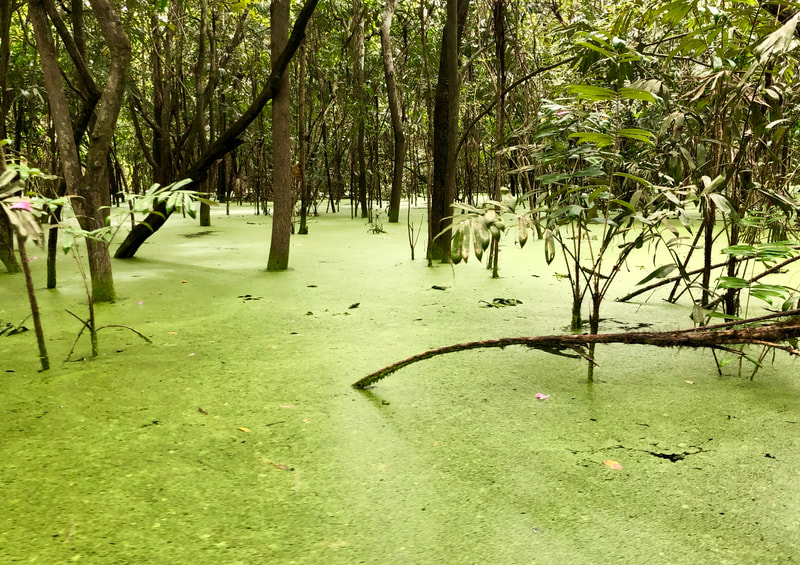 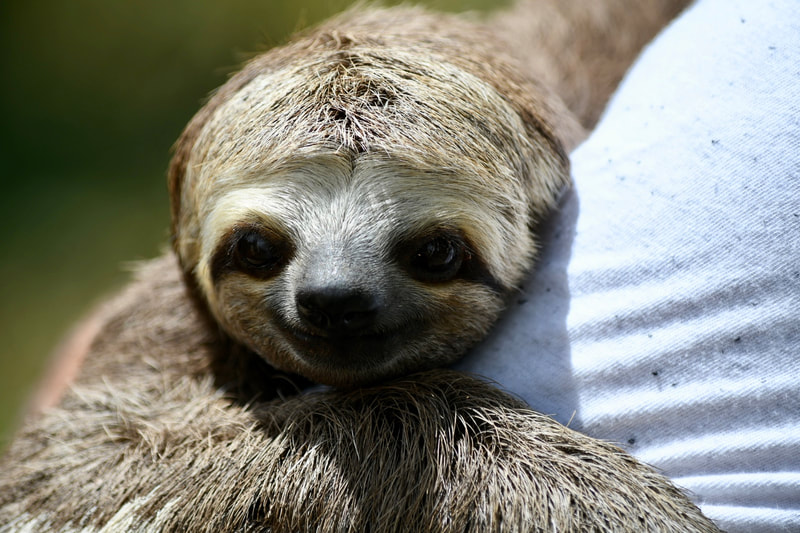 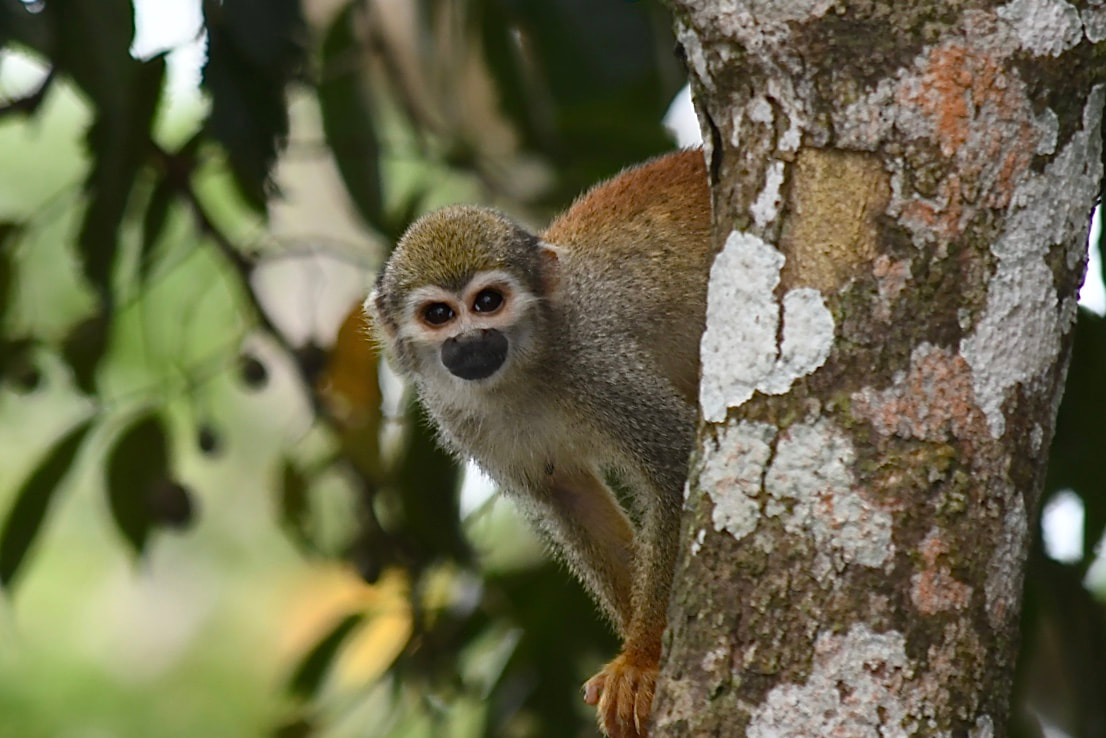 Day 2 of a two night/three day stopover was the changeover of about 300 plus guests on the ship. The bags were all out in the corridor again as always the night before you depart a ship and you spend a bit of time trying to catchup with those you’ve met along the way before they leave the ship. We had a 8 hour river tour booked so after grabbing a croissant for breakfast from upstairs, saying a few quick goodbyes, we met our two travelling companions and headed ashore to meet our guide. By the time we sped away from the wharf in the small river boat up the Rio Negro, it had started to rain and arriving at a settlers museum 45 mins up the river, it was still not great. We looked at various historical exhibits in the riverside houses telling the story of time gone by when wealthy rubber merchants would send their clothes back to Paris to be washed and that they imported their bathwater from Europe as well. Well that’s what they told us so it must be true! Sounds like I need to Google some of that maybe… or were those rubber barons really that excessive two hundred years ago?

Panarama view of stunning Manaus Opera House before a show
Well the heavens opened up before we could get back to the boat so we waited a while and it just got worse so we ended up getting a little wet negotiating the clay pathway to the small wharf. Next stop was the Indian Village where they performed a number of  traditional dances for us. Then we ate ants. Yes termite ants to be precise. Dried up, with a rather large head, crispy critters that were more nutty than I expected. I wouldn’t have eaten them but the other three people ate them.. so what could I do? Don’t you hate peer pressure!

Having survived the ant culinary experience, it was on to see the pink dolphins native to the Manaus area. They have this long nose and are a pinkish grey mottled colour which does not bode them visually well as we are in the Rio Negro - the largest tributary to the Amazon River. It’s huge too and the dark colour comes from humic acid due to an incomplete breakdown of phenol-containing vegetation from sandy clearings - hence the name, and watching the dolphins swimming off the wharf right in front of us, you can see the blackness of the water. 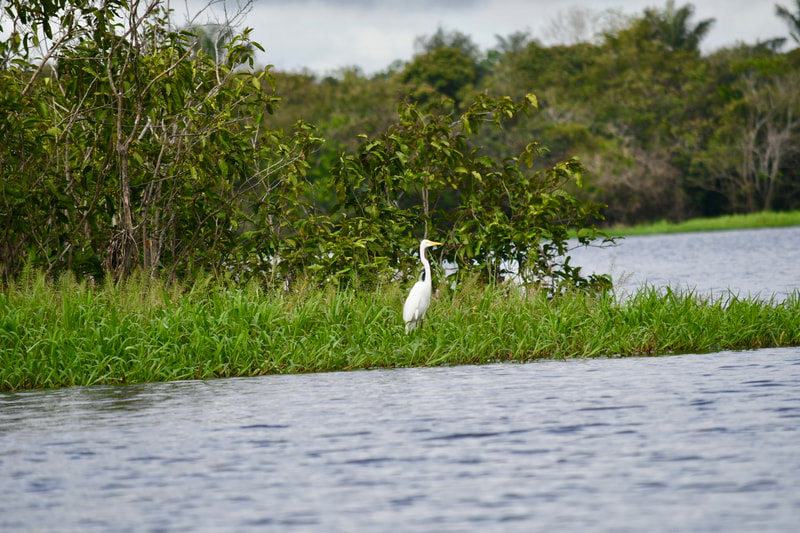 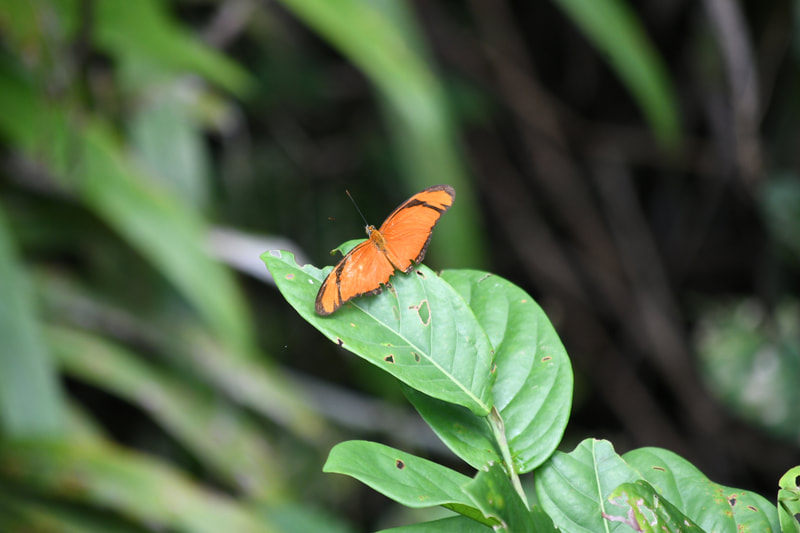 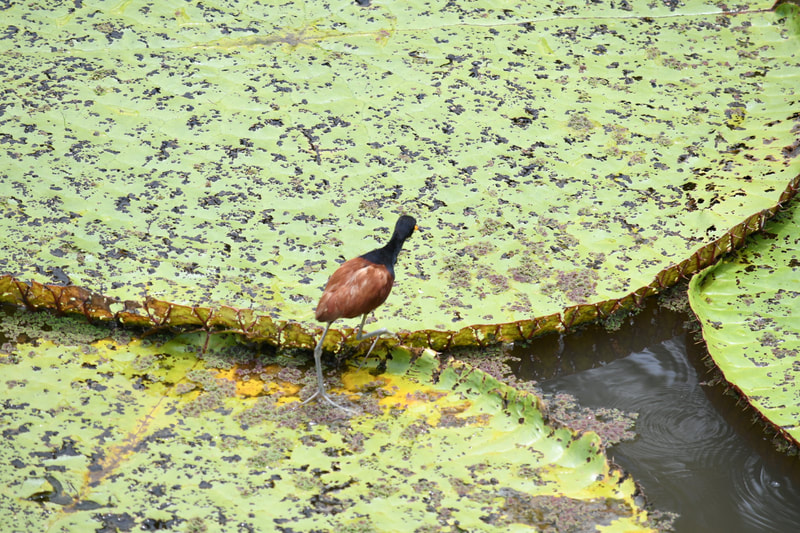 ​We sped south back towards Manaus heading for the small tributary to take us to Parque Januari where we were to have lunch. The tributaries got smaller and smaller and at times, the six of us including skipper and guide, sat motionless from time to time with the motor off watching the scenery and wildlife - soaking it all in. Just lovely to experience it all. At one stage so far in we had to do a u-turn and negotiate our way out along with the mozzies that had arrived. The water appeared totally green here from the small leafed vegetation growing on the water surface. Once back to the main tributary, we headed to a floating house in a small village where a baby sloth appeared - and a large snake I might add. As the photos will show, Sloth are such appealing animals and it was so unexpectedly soft to touch. What a face! Then we headed off again and next we stopped at a big floating restaurant for a buffet lunch  in the middle of nowhere it seemed - buffet style food is very common in Brazil. A walk over a raised wooden walkway to the nearby waterlily pads meant we encountered monkeys who were more interested in the food the guide had than us. They came down from the trees and sat on the rails being quite used to constant stream of visitors I suspect.

Back in the boat again and we sped away to the meeting of the rivers where the Rio Negro and  Rio Solimões meet to form the Amazon River - Rio Solimões brings cooler water down from the Andes in Peru meeting the black and warmer water of the Rio Negro just near Manaus forming the might Amazon River at this point. The visuals of the black and brown water meeting is very obvious as well as the water temperature if you hold your hand in one river as the boat crosses the colour line to the other, you can feel the temperature change. 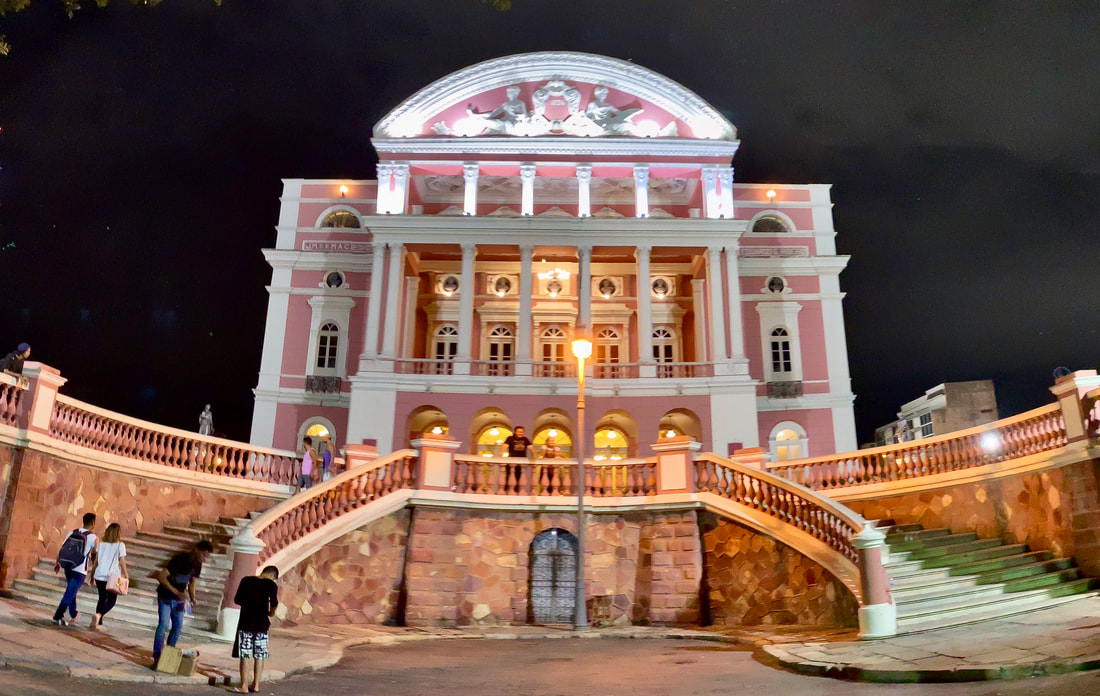 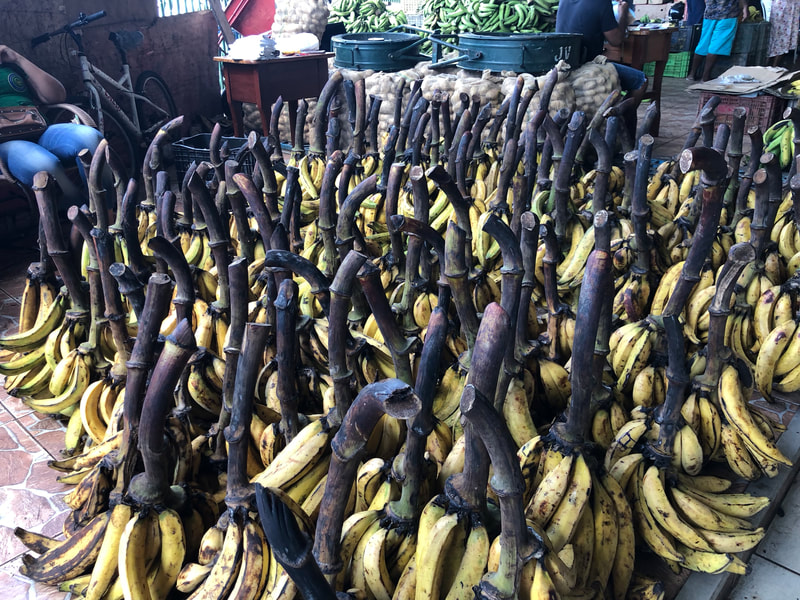 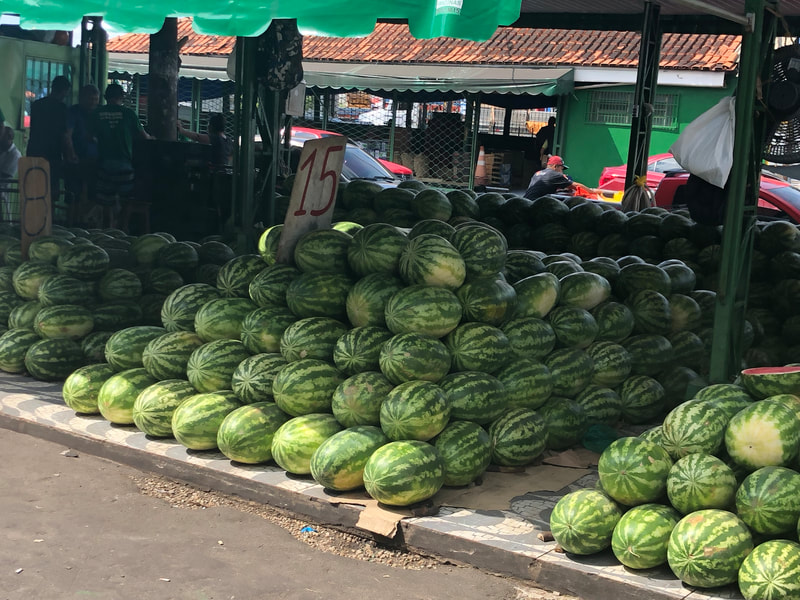 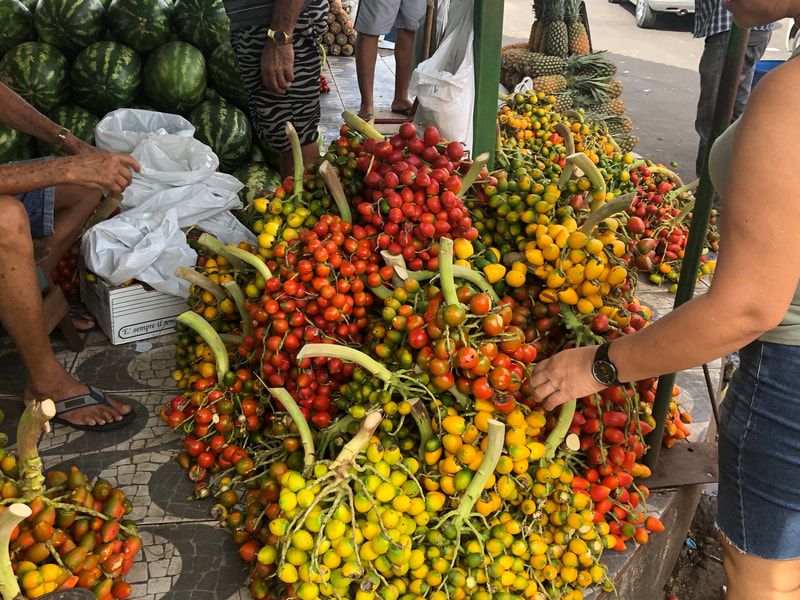 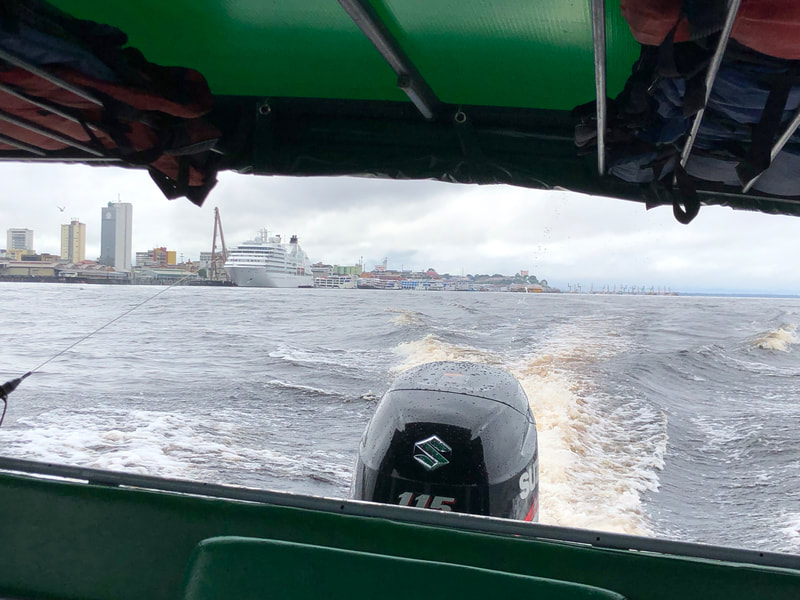 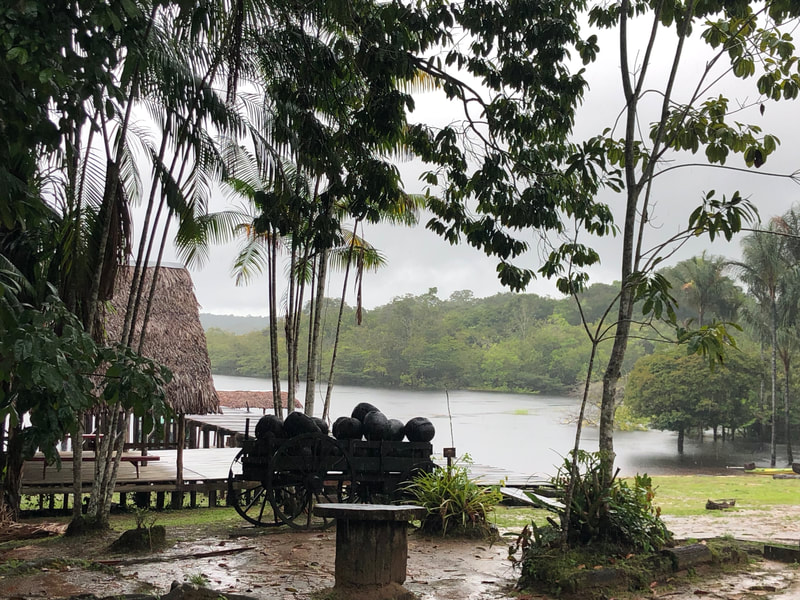 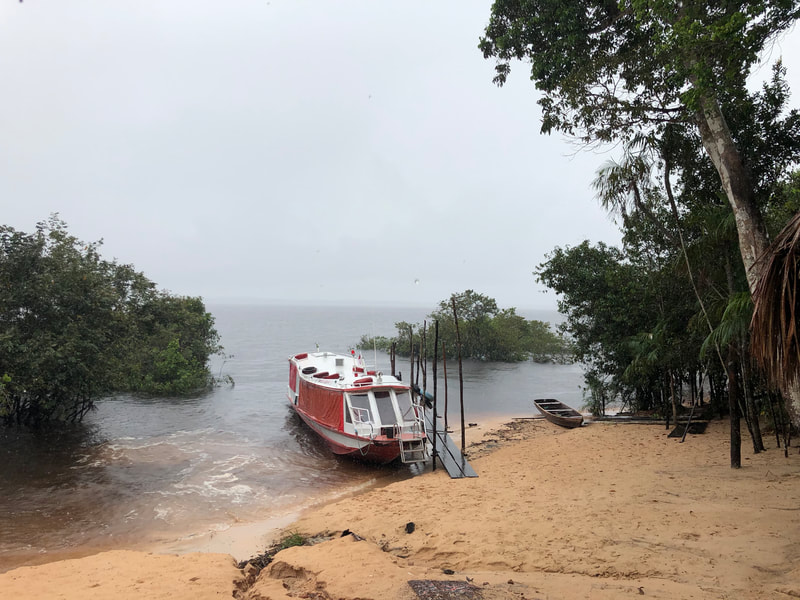 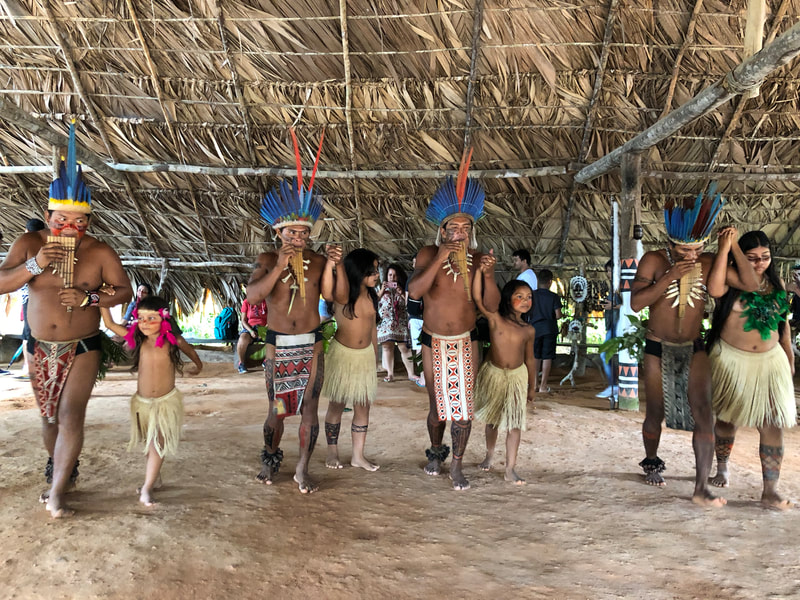 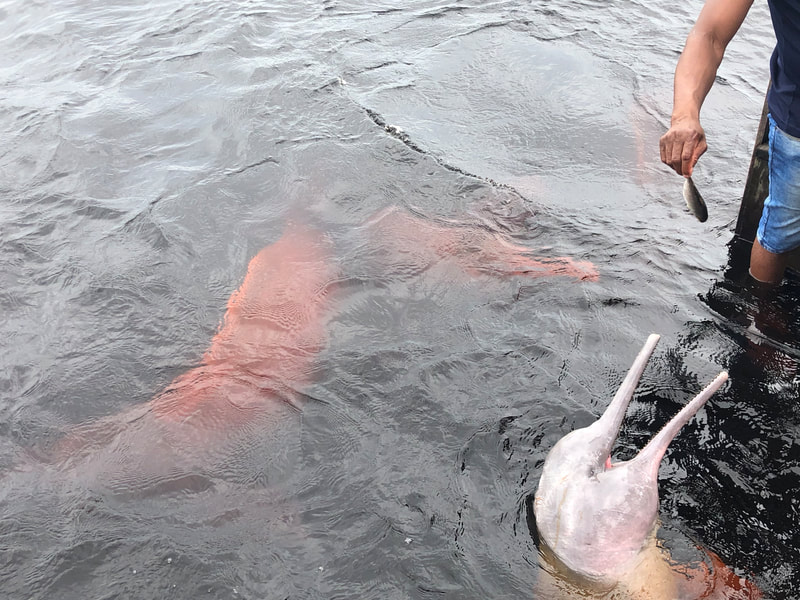 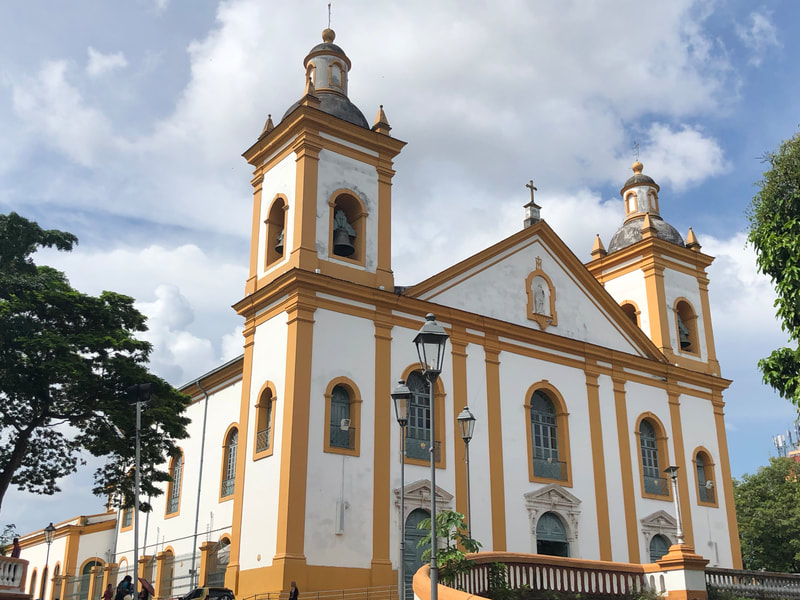 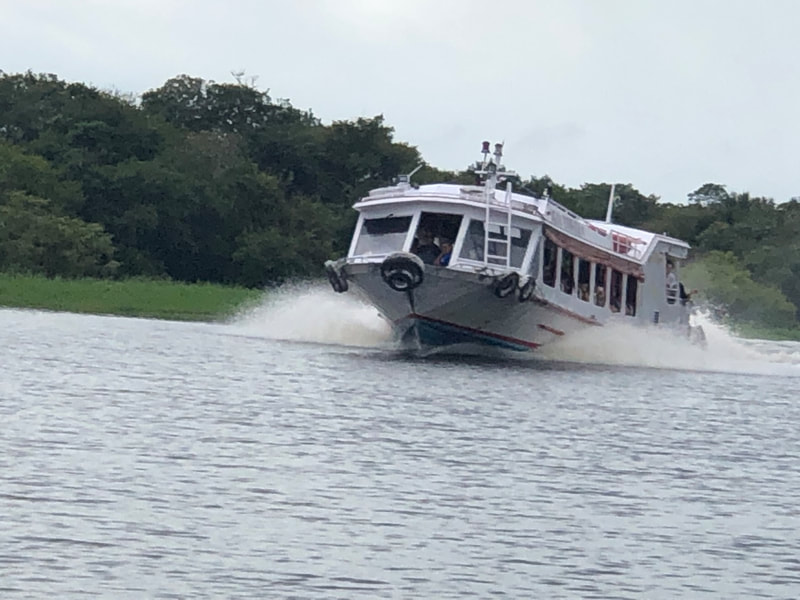 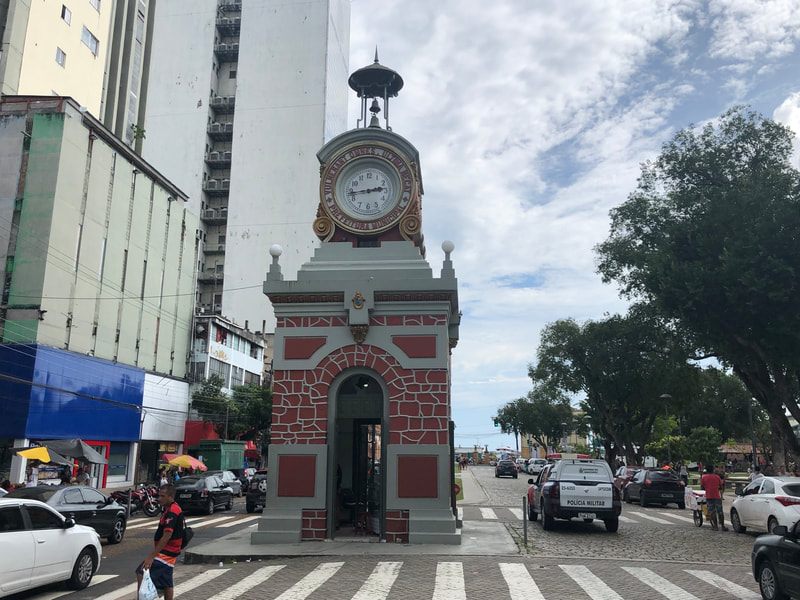 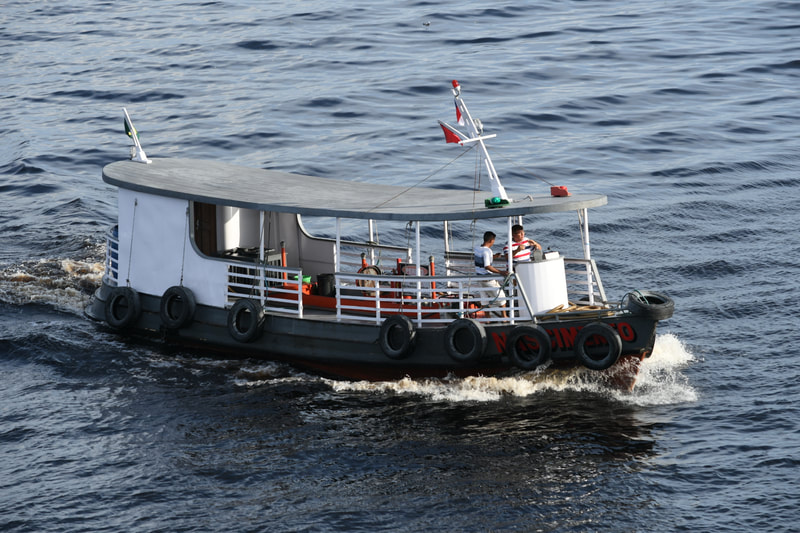 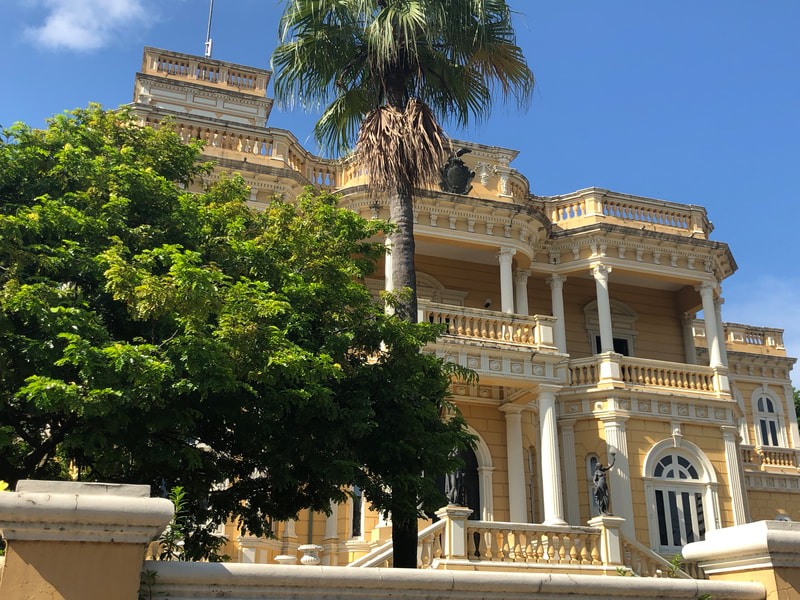 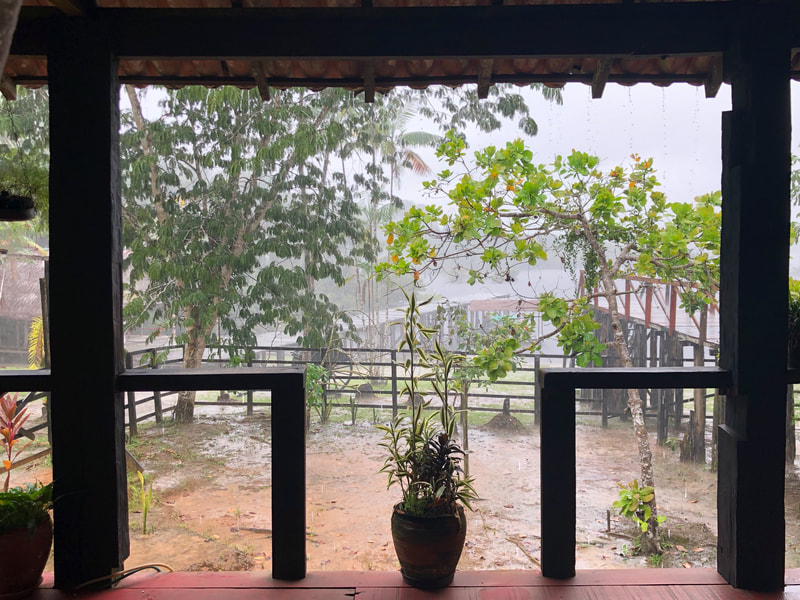 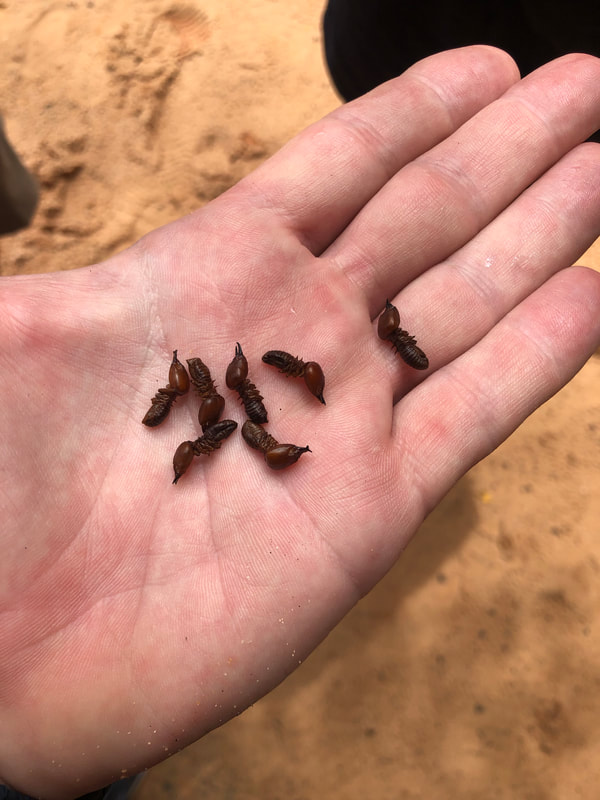 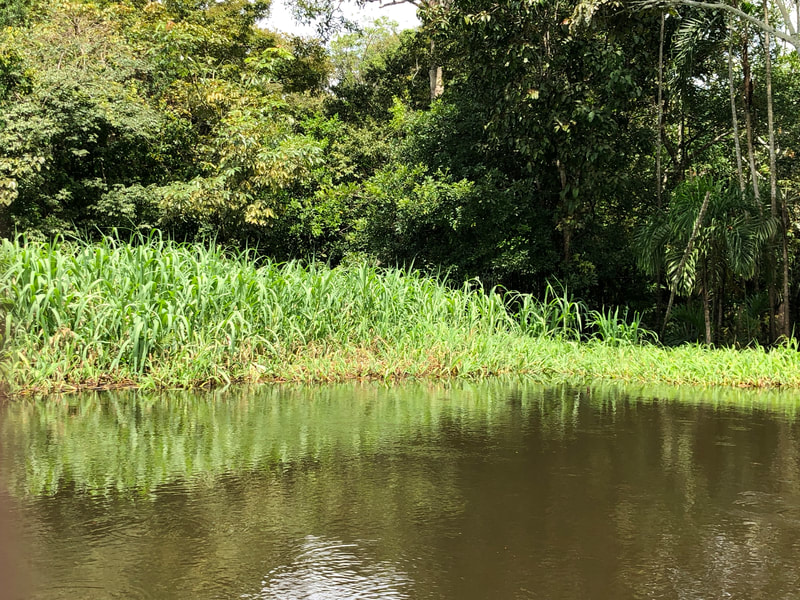 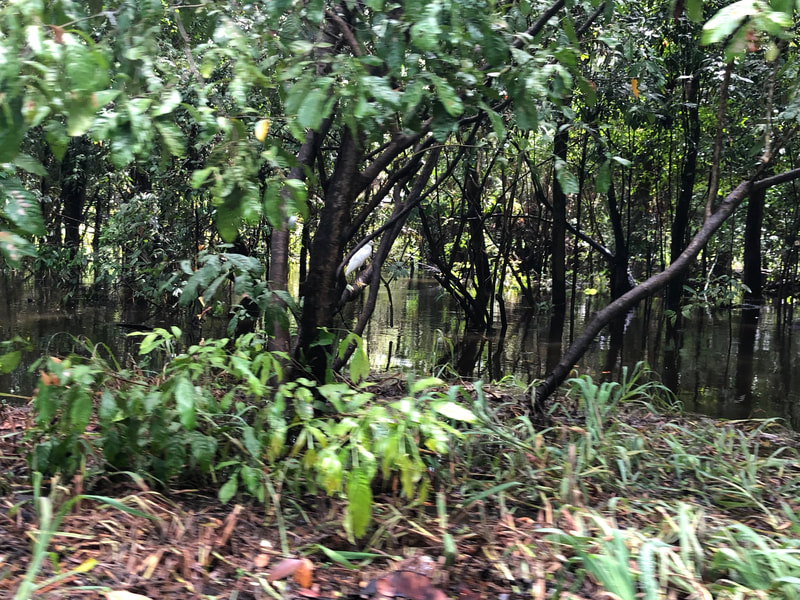 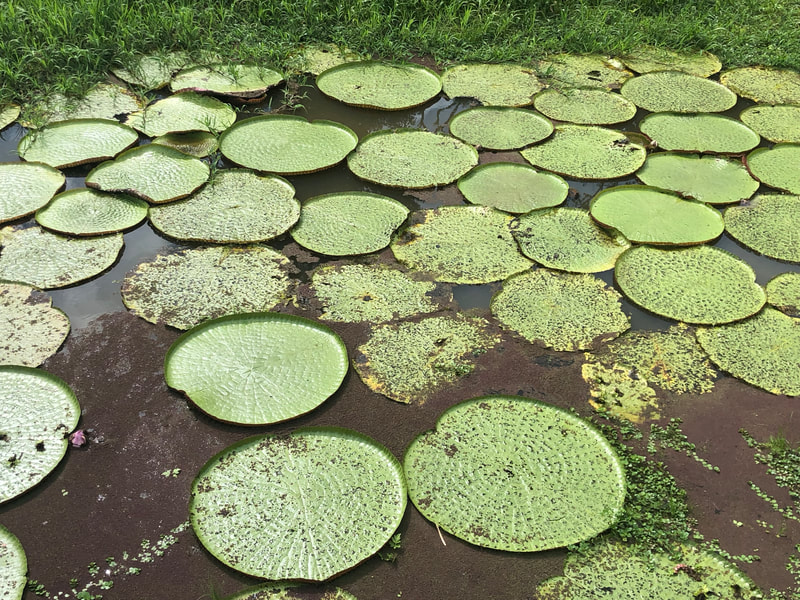